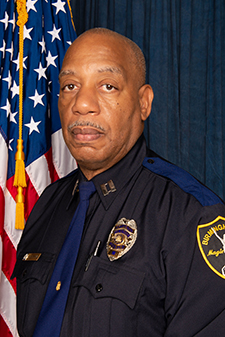 Captain Raymond Cochran was born and raised in Birmingham Alabama. He is the oldest of four siblings. He currently has over 32 years of law enforcement experience, all with the Birmingham Police Department. Captain Cochran started his career as an officer at East Precinct, from there he transition to the Tactical Unit as a Solo-Motor. Upon his promotion in 2006 to sergeant, he was reassigned to North Precinct. In 2013, he was transferred to the Community Service Division and subsequently back to the Tactical.

Captain Cochran is a retired veteran of over 29 years with the United State Military (Army Reserves). He deployed twice during his military career, Operation Iraq Freedom and Operation Enduring Freedom. He was activated for Operation Desert Storm Desert Shield, but did not deploy overseas. He has completed all required military leadership training, PLDC, BNCOC and ANCOC.
Captain Cochran hold a Bachelor of Science degree from Miles College in Criminal Justices.