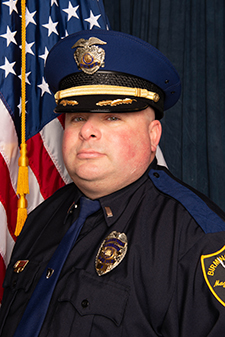 Lieutenant Christopher R. Hays has served as the Shift Commander for Bravo and Charlie shifts, as well as the South Precinct Task Force since February 2018. The South Precinct is comprised of four shifts and one task force, and is a very diverse area. The precinct combines business, entertainment, and residential areas with multiple cultures and a wide range of economic statuses.

Lieutenant Hays has worked closely with the Birmingham Police Academy in implementing new training for the department. The Injured/Downed Officer Rescue training focuses on standardizing a method to evacuate an officer who has been wounded in the line of duty. The methods include the use of vehicles for rescue from roadways or parking lots, and utilizing four officer teams to rescue officers from buildings. Basic first aid is discussed, and methods to transport the officer to a safe area where the officer receives medical treatment. The goal is to reduce the time an injured officer is in an unsafe area, and get them to treatment as soon as possible.