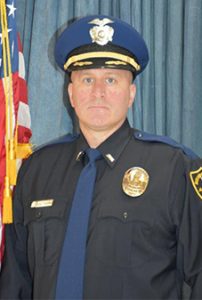 A Birmingham native Lieutenant John P. Callahan is a 21 year veteran of the Birmingham Police Department where he began his career in 2001. After graduating from the Birmingham Police Academy, he was assigned to the West Precinct to serve as a beat officer, Rapid Response Team member and Field Training Officer. In 2008, he was transferred to the Tactical Operations Unit. While there, he additionally served as a TSA K9 handler. He also completed basic and advanced SWAT school training.

In 2009, Lieutenant Callahan was promoted to the rank of Sergeant.
He was assigned to East precinct evening shift. While serving as a sergeant, he had the opportunity to be assigned to supervise officers of the North precinct, tactical operations, and vice/narcotics unit.

In 2011, he was reassigned to the Tactical Operations Unit. While serving as a sergeant in the Tactical Operations Unit, he served on the Mounted Patrol Unit, as a SWAT instructor, hostage negotiator, Less Than Lethal Munitions instructor, Traffic Homicide Supervisor, Drug Interdiction, and Freeway Patrol. Also, he was responsible for special event planning and dignitary protection.

Lieutenant Callahan earned a Bachelor of Science degree in Criminal Justice and a minor in Psychology from the University of Alabama at Birmingham. During his time with the department, he has placed an emphasis on continuing his education. He has earned numerous training certificates in various law-enforcement fields to include leadership training and development. In 2022, he was promoted to the rank of lieutenant and assigned to the South precinct as Evening Shift Watch Commander.

Lieutenant Callahan and his family are members of Church of the Highlands. He is committed to being a servant leader and takes joy in helping others achieve their career goals and cheering on his football team, the Crimson Tide.