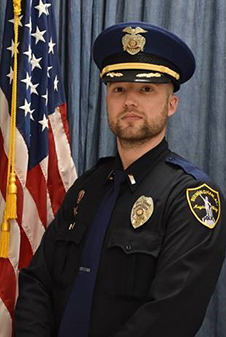 Lieutenant Joshua Osborne started his career in April of 2009 and has had the privilege of serving in several capacities during his time with the Department. He began at South Precinct as a Patrol Officer, then joined the Precinct Task Force, and later became a Field Training Officer. After his time in Patrol, he moved to the Neighborhood Enforcement Team. Soon after, he was assigned to the Criminal Intelligence Unit as a Detective and helped to implement the Violence Reduction Initiative, and worked as part of a collaborative effort with the Department’s federal partners to curb violent crime. In February of 2018, Lieutenant Osborne was promoted to the rank of Sergeant and moved back to South Precinct where he oversaw the Precinct Task Force. In May of 2019, he moved to the City Wide Task Force, which was part of an all-out effort, to bring about crime reduction. Upon completion of this endeavor, Lieutenant Osborne was transferred to the Tactical Operations Precinct where he served as the Administrative Sergeant and as one of the SWAT supervisors. Upon his promotion to the rank of Lieutenant, he served as the West Precinct D Shift Commander. Lieutenant Osborne is currently the Tactical Operations Executive Officer.

Lieutenant Osborne is a graduate of Auburn University where he obtained his Bachelors in Political Science with a minor in History. He also received his Masters in National Security Studies from Troy University. During his career, Lieutenant Osborne has attended a number of training courses, and believes strongly in continuing to grow and advance his capability, to better serve in his duties. His auxiliary duties have included training both recruits and in service personnel on a variety of topics.