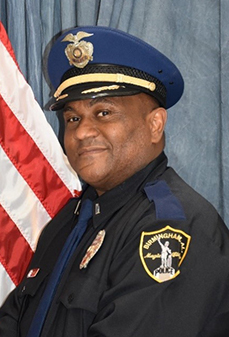 Adams served in the United States Air Force Reserve (USAFR -Sgt.) and was deployed in several support services roles, both in Germany and Panama for “Operation Just Cause”, during the capture of Dictator Manuel Noriega. In 1989, upon separation from the USAFR, he began his law enforcement career with the Alabama Department of Corrections.

In 1996, he joined the ranks of the Birmingham Police Department and was assigned to West Precinct. Adams served as a mentor and Field Training Officer (FTO), as well as, on assignments with the High Intensity Community Oriented Police Patrol (HICOPP) and Bike Patrol Unit.

In 2013, he was promoted to the rank of Sergeant and assigned to the Patrol Division at South and North Precincts. He served as the Precinct Supervisor for the FTO Program and Coordinator for Special Events at the BJCC, Railroad Park, and the Birmingham Barons traffic detail.

In 2019, he was transferred to the Investigative Bureau, Crimes Against Property Division, and supervised the Auto Theft and Burglary Detectives and civilians assigned to the unit.

In 2021, Lieutenant Adams was promoted to his current rank and currently he serves as the North Precinct Shift Commander. He is a member of Tabernacle Baptist Church and continues to serve as a mentor to several Birmingham City School students.

Lieutenant Adams completed numerous training courses during his assignments in patrol including the Personnel Board of Jefferson County (PBJC) Supervisor Programs and Criminal Interdiction training.