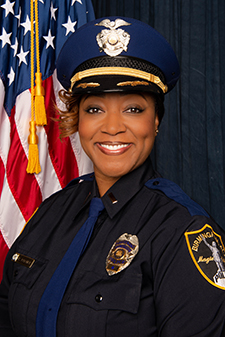 Lt. Reva L. Palmer has over 17 years of law enforcement experience.  She started her career with the Birmingham Police Department in February 2004.  Upon graduation from the Police Academy, she was assigned to South Precinct as a patrol officer.  She was there nine years before being promoted to the rank of sergeant in August 2013.

As a sergeant, Lt. Palmer was initially assigned to West Precinct.  While there, she served as the training and equipment sergeant.  In 2014, she supervised Operation Close-Out, which was a yearly operation that focused on crime prevention in several areas across the city, during the holiday season.  During Operation Close-Out, she worked closely with the Crime Reduction Team (C.R.T.) and the Neighborhood Enforcement Team (N.E.T.).  Also during her time at West Precinct, Lt. Palmer’s leadership ability was showcased in the Birmingham Police Department’s newsletter, “Behind the Line”.  She was the recipient of the Leadership Cup Award (Sworn).  The Leadership Cup Award was voted on by sworn and non-sworn personnel who wanted to acknowledge the outstanding work and efforts of a Sergeant/Supervisor.

In 2016, Lt. Palmer was selected to go to the Community Service Division where she was the Community Policing & Revitalization (C.P.R.) Sergeant.  As the C.P.R. Sergeant, she oversaw several programs such as the Citizens Police Academy, Youth Citizens Police Academy, Citizens on Patrol and the Shadow an Executive program.  She also worked very closely with the department’s School Resource Officers.

After a brief stint in the Special Victims Unit, Lt. Palmer was transferred to North Precinct. She served North Precinct diligently until her promotion. Lt. Palmer was promoted to the rank of lieutenant in July 2019.  She is currently assigned to a place she calls home, South Precinct, where she proudly serves as the Evening Shift Commander.

Lt. Palmer was born and raised in Birmingham, AL, where she graduated from Wenonah High School.  She continued her education by obtaining a Bachelor of Arts Degree in Political Science from Alabama A&M University and a Master of Science Degree in Criminal Justice from The University of Alabama, “Roll Tide”.