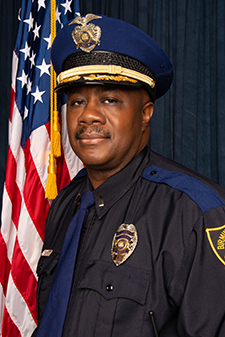 Lieutenant Ronald W. Crumbley is currently serving as the Commander for C-shift at West Precinct. He oversees the shift and mentors the sergeants and officers, motivating them to be good police officers and effective in community policing.

Lieutenant Crumbley is a native of Bessemer, AL and graduated from Jess Lanier High School in 1988. He served in the US Air Force for 4 years from 1988 to 1992 with an honorable discharge. He has served for 25 years with the Birmingham PD. He started his career in the Police Academy from February 1994 to July 1994. He was assigned to the South Precinct from July 1994 to July 2009. He was promoted to Sergeant July 4, 2009 and assigned to East Precinct July 11, 2009 as a Patrol Supervisor. He was assigned to Police Communications August 23, 2013 to October 15, 2015. He was assigned to Support Operations in October 2015 to February 2018 and served as a supervisor for Data Entry, Records, and the Property Room. He was promoted to police lieutenant February 17, 2018 and went back to East Precinct as the Commander for D-shift. In October 2019, he was assigned to the Crimes Against Property Division.

He is married to Dina Crumbley, and the father of one daughter and three sons.