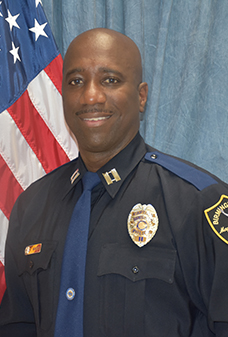 The TACTICAL Unit is the Birmingham Police Department’s SWAT Team within the Tactical Operation Precinct. The TACTICAL Unit’s missions vary from conducting property search warrants, felony arrest warrants, narcotics search warrants, and SWAT calls. SWAT calls range from active shooter situations, barricaded suspects and hostage incidents. This unit assists both the Patrol and the Investigative Bureau’s by the use of Specialized Weapons And Tactics to ensure public and officer safety.

The TACTICAL Unit also conducts daily Crime Suppression Operations. These operations allow officers to effect criminal activity in high crime areas of the City of Birmingham by use of traffic stops, field interviews and aiding in high priority calls.

The Birmingham Police Department’s Canine Unit works closely with the Patrol Bureau and the Investigative Bureau in the prevention and apprehension of criminal offenders.  The Canine Unit utilizes both Patrol K-9’s and Detection K-9’s to accomplish its goals.

The Patrol K-9’s are utilized to search and locate felony offenders as well as violent misdemeanor offenders who pose an imminent danger to the general public.

The Crime Reduction Team is an investigatory unit with the primary mission of conducting covert investigations to locate and identify organizations and/or persons of interest that may be related to or influence violent crime. These investigations include static and mobile surveillance, electronic exploitation and developing creditable Human Intelligence.

The Birmingham Police Department Motor Scout Unit on a daily basis is assigned to investigate and address vehicular traffic issues within the city.  Motor Scouts identify, investigate, and provide traffic enforcement in areas that have been designated as problem traffic areas through citizen complaints or police investigations.  Motor Scouts also provide a highly visible police presence in high crime areas and they are frequently utilized to address specific crime problems in response to areas where a violent crime has been recently committed.

Motor Scouts also escort dignitaries of high profile and/or VIP visitors to and within the greater Birmingham metro area.  Scouts organize, coordinate, and secure motorcades for these VIP’s, which include but are not limited to visitors such as The President of the United States, Vice President and Secretary of State.

The Birmingham Police Department EOD Unit/Bomb Squad is comprised of federally trained bomb technicians who are on call 24 hours a day.  The Bomb Squad responds to and renders safe any potential threat involving any explosives or hazardous materials that endangers the public’s safety.  Bomb Techs are trained to engage, disrupt and remove any potential improvised explosive devices (IED’s), suspicious items/packages, chemical threats/weapons, hazardous materials and any potential weapons of mass destruction.

Bomb technicians are also trained to analyze any of the aforementioned scenarios and operate in a manner which minimizes the threat to the public.  The Birmingham Police Bomb Squad continually works closely with our federal partners, particularly the FBI and ATF.